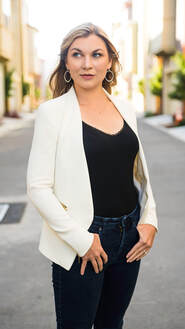 Photo by Khris Sanchez
Lyric Soprano Liesl McPherrin has performed a wide variety of repertoire in both opera, concerts, and musical theater, and sang as a chorister with many professional ensembles.

Known for her comedic roles in musical theater and light opera, Liesl has performed the roles April in Company, Pauline in La Vie Parisienne, Madame Herz in The Impresario, and the titular role in My Fair Galatea. In Spring 2019, Liesl has performed the role of Bianca and the voice of The Dawn with Island City Opera in their production of La Rondine. In addition, she played Lisette with Pocket Opera's production of La Rondine, where “Her stage ease communicated wit and salt, and so did her rich and expansive voice." - Operawire. In the role of Carolina in Cimarosa's The Secret Marriage with Pocket Opera, she was praised by San Francisco Classical Voice for her “brilliant top notes and winning comic chops.”  A fan of original works, Liesl played tail-wagging Mutts in Mutts and Maribel Walk to the Moon a chamber opera for children by Nancy Bachmann. Ms. McPherrin has also been a featured soloist with Sing for America, San Francisco Renaissance Voices, and the Yuba-Sutter Orchestra. In Fall 2021, Liesl performed the role of Serpina with the student outreach production of La Serva Padrona with Livermore Valley Opera. Liesl was also in the Extra Chorus at San Francisco Opera for their production of Fidelio in October 2021.

In addition to singing, Liesl is an avid pedagogue and choral conductor. She has directed many youth and community choruses and currently directs at Coastside Lutheran Church in Half Moon Bay. Liesl is on the music faculty at Las Positas College where she teaches voice and piano. Liesl frequently offers choral masterclasses and workshops with developing singers in the Bay Area.

She earned her Master of Music in Vocal Pedagogy and Performance at Westminster Choir College in Princeton, New Jersey. Liesl is a member of the American Guild of Musical Artists and the National Association for Teachers of Singing.